Our house is nestled on a slope about 8 feet below a split rail fence. Right now all the lady cows are in Rutherford County finishing up the stockpiled grass from the farm we lease down there and the two bulls are grazing in the Chamomile Field which borders our yard. The bulls seem to get along with each other just fine since there aren’t any cute cows to show off for. The trees along the fence line help to keep their spirits up as it shields them from the rainy weather we’ve had recently.

It’s been a wet couple of weeks mostly marked by mud on our boots, red clay paths throughout the farm store, and the gnawing need to pour the concrete pad for the kitchen we are building at the farm. We try to wait patiently for the rain to stop, long enough to make mopping a worthwhile endeavor and to check for a forecast that suggests we might get something done in the near future. We overcame the urge to be productive one day last week and instead cuddled on the couch watching basketball and those hilarious Capital One and VW Passat commercials while discussing that the next feasible day to pour the pad would be in a week. So we would just have to wait regardless of what the google calendar plan I put together last week indicated. I am from Louisville, KY and Jamie’s from NC so basketball is something that both he, the kids and I do together during the month of March. It wasn’t SO bad to have to wait out the weather I guess. (Note: UL plays NC State on Friday night. Go CARDS!)

But while my mind was being swept away in basketball and how my bracket was performing, I kept having this unsettled sense that I was being watched. As I turned my head, slowly mind you, to see what could be out there, the bull- all 1500 lbs of him- was intently leaning over the split rail watching us through the bay window as if he wanted to come in to get warm and dry by the woodstove too! I looked at Nolin and said, ” Look, I think the bull wants to come inside.” He walked over to the door and said, “ok,” gauging my reaction and teasing me by turning the sticky handle of the door threatening to call the bull “co-um, cuu-uum”.  Levi got on board with the idea and we considered where the bull might sit that Sunday afternoon and which team he would be pulling for. Par for the course with a discussion between two boys, ages 8 and 5, the question was also entertained, “what if he poops and pees in the house mom?” “That would be a disaster boys! [consider mopping that up I think] “lets just let him stay where he is, how about that?” 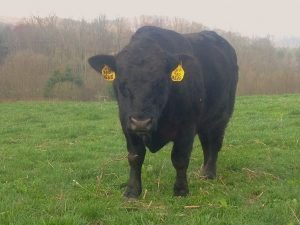 He’s there at the top of the pasture nearly every morning while we are getting ready for school. Maybe he appreciates the general chaos our household embodies ranging from indoor Nerf wars to celebratory win wrestling matches. (see below) I hope our family of five provides those two bulls with ample entertainment and peaks their curiosity about humans in general. I remember a time when it was final exam week at Warren Wilson and I was splitting my time between studying, two jobs, my friends and a functional amount of sleep, I would often drive back onto campus and pass the cows in the field wishing that I had a cows life of leisure. Some of those lady cows were nearing 10 years old at that point seeing them hanging out on Dogwood all day grazing and socializing spawned a jealously within.  Free time was such a luxury in college and at times still is, but in that moment when my husband was home, my kids were all together and the game was on, I was happy to be on inside the looking out and even happier that the bull was on his side of the fence and not in my living room! 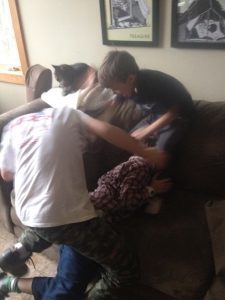 What ARE We Doing?

The Man Behind Hobson Dobson
Scroll to top
